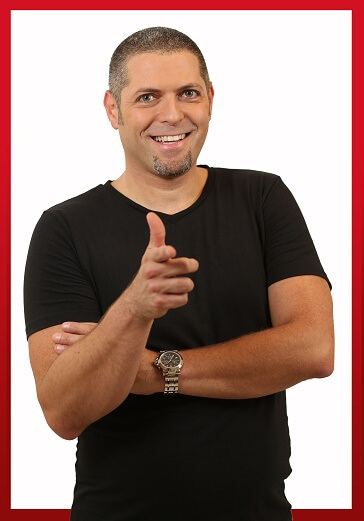 Guy Bracha (Guy the Magician) is one of Israel’s best known, most successful and best loved magicians.
His appearances have been favorites with the Israeli public for over 20 years and he performs for a variety of audiences in Israel and abroad.
Guy has been guest artist on several popular television programs and was invited by one of them to present a segment of his own.
In 2007 Guy appeared as resident magician on the Children’s TV channel and in 2005 the Israeli Society of Magicians awarded him the title of Most Original Magician.

Guy has a wide repertoire of children’s shows and programs customized to different age groups.
His flagship “Magic and Beyond” show is packed with exciting and varied content and is suitable for larger stages, shopping malls, group outings, team building events and corporate and organizational happenings.
Another of Guy’s specialties is Bar and Bat Mitzvahs, where a mind-blowing combination of illusions and telepathy always go down well.
For details of shows and programs, click on the Shows button above.

Guy acquired his extensive professional training and expertise over many years from a large number of courses, workshops and seminars, as well as books and videos. He has also had first hand contact with many veteran magicians and mentors in Israel and overseas. After completing a BA in Political Science and Sociology in 2001, he felt free to devote himself to his long-time first love: magic and entertainment. Guy is continually learning and evolving and never rests on his laurels. He regularly attends professional magic conventions in Israel and abroad, as well as international theater and fringe festivals. Some program content is Guy’s own original creation.
All of Guy’s shows (with the exception of the play A Dream Come True) can be performed in either Hebrew or English.

A few milestones in Guy’s career:

The Difference: “What’s makes you, Guy the Magician, different from other magicians?”

This is a question I am used to hearing right from my very first telephone contact with parents, who understandably want to know: “Guy, what makes you different from any other magician?” “What makes you stand out from the rest?” Happily, it’s an easy question to answer.

1. Professionalism and Experience: First, let me make it clear that I am a professional magician (and not an events organizer). Magic shows are my sole occupation and profession. I have dedicated myself to staging shows for over 20 years in all parts of Israel, and also overseas. Hence, I have accumulated vast experience in the field, and all of this contributes to making my shows the polished success they are. Add to the mix an exceptionally good rapport with children of all ages, and the end result is my unique winning formula.

And there’s even another special touch: unlike other magicians, I studied at the prestigious Beit Zvi School of Acting, a qualification that adds extra polish to my stage performance and a definite edge to my magic shows.

2. Originality and Innovation: My shows are particularly known for originality and creativity. I have made a point of packing them full of excitement and innovative ideas, many of them the fruit of my own creativity. There is no “down time”. Today’s children are sophisticated, knowledgeable and discerning. In my shows they will never be bored or yawn: “Oh, we saw that before… my friend So-and-so had it at his party…”. It is no coincidence that in 2005 the Israeli Society of Magicians nominated me Israel’s “Most Original Magician”.

3. Focus on the Child: Throughout the event the birthday child always gets my special, full attention. He (or she) – and not Guy the Magician – is unmistakably the star of the show. At the end of the day his self-image is boosted and all his peers take notice of him. It saddens me to hear from some parents that this is not the case with all magicians and entertainers.

4. Educational Content: My shows are much more than a random selection of magic tricks. I pay great attention to building a really special experience for children, with the thoughtful (though barely noticeable) inclusion of enriching and educational content. One notable example is my one-man play, A Dream Come True, which has been running successfully since 2008. That year I received official recognition from the Omanut La’am (Art for the People) organization, and in 2013 was similarly honored by a government body, Tarbut L’Israel (Culture for Israel).

5. Correct Language: Slang and sloppy, ungrammatical language are commonplace today. I, however, consider it of the utmost importance to speak to children in correct and precise language. Sometimes I even use highly sophisticated terms, knowing they may be unfamiliar with them and hoping they will ask for an explanation – as they usually do. If only more performers paid attention to this aspect….

In short… My slogan, “Magic and Beyond” was not chosen by chance. I genuinely aim to and believe I do offer children a truly exciting experience that is magic and beyond.

Guy Bracha (Guy the Magician) is one of Israel’s best known, most successful and best loved magicians. His appearances have been favorites with the Israeli public for over 20 years and he performs for a variety of audiences in Israel and abroad.